'Occupy Sussex' Continues was the headline by Bess Browning in February's Le Nurb, and so it has proved.

Today, Monday March 25th, is the national demonstration against privatisation being held at the University of Sussex.

Click here for regular updates and the timeline.
Posted by Brunel IWW at 06:54 No comments:

Brunel IWW are proud to support the Union of Brunel Students for their participation in the 2012 Demo.

Click here to read on.
Posted by Brunel IWW at 08:24 No comments: 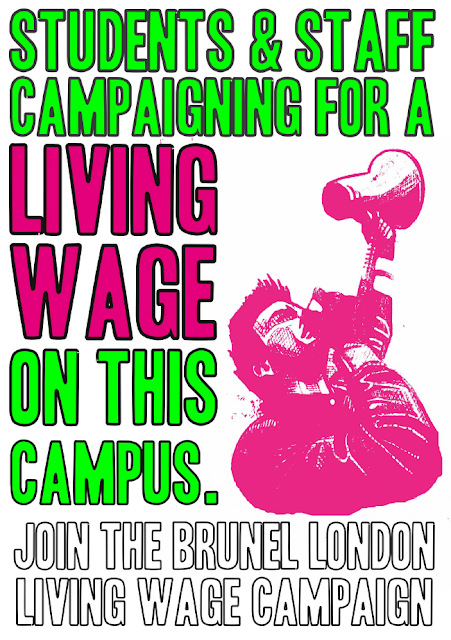 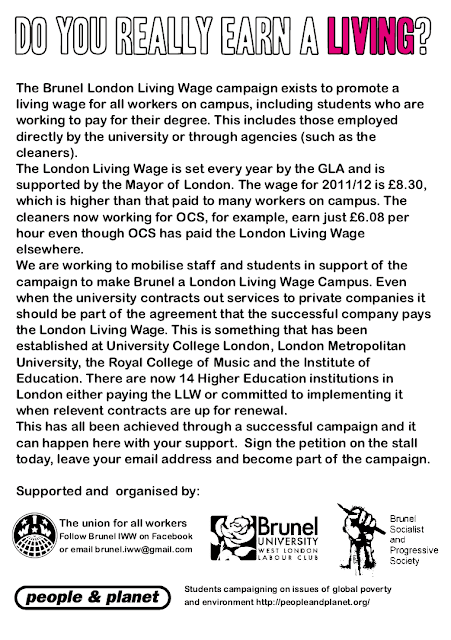 A Memorable Visit to IWW Chicago

On a recent (July 2012) trip to the USA during which I spent a week in Chicago, I took the opportunity to visit the IWW head office which is situated there. 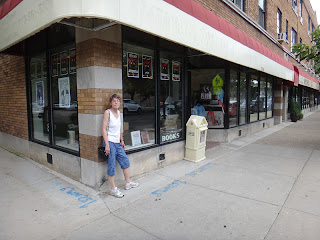 I had been a little apprehensive while contemplating my proposed visit not knowing what to expect of such an august place. Was it going to be a big shiny building of glass and steel, so characteristic of Chicago architecture, with a forbidding facade and the words 'Industrial Workers of the World' carved over the entrance? While inside perhaps there might be a plush air-conditioned lobby with a receptionist seated behind a large desk who would ask me what my business was and had I made an appointment? I kind of fancied not somehow, I didn't really imagine that it would resemble the HQs of Unison or Unite and similar mainstream unions, but the IWW is a growing organisation and you never know! A quick phone-call to enquire whether it would be OK to drop by and to check hours of opening, calmed my anxieties as a cheery voice assured me that it would be absolutely fine and signed off with 'look forward to seeing you.'
Next morning I and my partner took the elevated train line, known as the 'El' to Chicagoans, to the suburb of West Montrose, a working-class district a long way from the skyscrapers of down town Chicago. We found the place easily and I was relieved to see what was basically a little corner book store with familiar looking pamphlets, books and IWW paraphernalia displayed in the windows and nothing in the least intimidating about it at all!
Inside I was pleased to meet a bunch of very friendly people and introductions were made. There were five people working there that day, sometimes there are a few more. Customers drop in to browse the very well stocked book shelves of course and they sometimes also get visitors, both FWs like myself, or people who have heard of the IWW and want to find out more about it.
Among the five people there that day there were two interns who, when I asked them whether they were being exploited, replied cheerfully that they were but didn't mind in the least! One of the girls was in the happy position of earning herself credits towards her upcoming course at grad-school where she will be studying political science. (British universities please copy!)
They were all very interested in hearing about our Brunel group, what we were doing and what we were hoping to achieve, in particular with regard to the cleaners and the gains they had made and the battle ahead for the London Living Wage. I was asked to keep them posted on developments. As the 'nerve centre' of the IWW they have their ears close to the ground in any case. 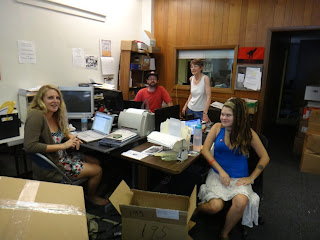 Sam Green, the General Secretary of the union, came out of his office to say hello. We chatted for a while and he showed me one of their ongoing projects, which is the mapping of IWW members throughout North America with a view to connecting single, isolated fellow workers within various areas who otherwise would not know of each other's existence – a very necessary and worthwhile task. I was also shown an urn in a display case which contained the ashes of the famous Swedish born activist and song-writer Joe Hill. I was told that it contained just a portion of his ashes, other portions being in other locations.
They were also still in the process of  re-organising after a fire in their previous office earlier in the year which fortunately resulted only in water damage to the part of the premises they occupied, but meant that they had to spend months finding an affordable alternative space. They were happy in the place they now found themselves in and were settling in well.
I spent some time looking around the shop and bought some pamphlets, papers and a very flash looking red tote bag to put them in! I reluctantly had to leave without any of the very interesting books as I was already packed to the gills and couldn't have managed to fit in anything more, I intend to visit the online shop however.
After taking some photos inside and outside the lovely little office/shop we said our farewells and left.
I would certainly recommend anyone who happens to be in Chicago that they go and visit the IWW HQ and the welcoming, interested and committed people who work there. Actually Chicago itself has played a key part in labour history from the 19th century onwards. It was there that the Haymarket massacre took place for instance and there is a monument near the city centre to the people who perished and the anarchists who were executed afterwards for their alleged part in the tragedy. The martyrs themselves I was told, are buried in a cemetery further out which is also the final resting place of the once notorious anarchist writer and activist, Emma Goldman. Unfortunately we didn't get a chance to go there and pay our respects, but next time perhaps!
Posted by Brunel IWW at 10:34 2 comments:

IWW Education Workers were recently at the forefront of raising awareness about issues surrounding the wiping out of budget deficits of newly-converted academies. These issues have led to the City Council’s decision to put the creation of 8 academies on hold. If the original plans had been allowed to stand, £1.3 million of taxpayers’ money, which was owed to the council by the schools, would have been written off with the new academies starting with a financial clean slate. This would have meant the people of Birmingham subsidising schools which are no longer accountable to the local community and which are often run by private organisations which have little, if any, stake in the areas in which their schools are based.
One related issue which has not been raised so far concerns redundancies in schools about to become academies. At least one of the 8 proposed academies has made redundancies before conversion in order to pay off its current deficit over a number of years and achieve a balanced budget. When a local authority school, this money would have been paid back to the Council but, once a school becomes an academy ‘independent’ of local authority control, this would no longer be the case. Thus, you could have the situation where not only money which is owed to the Council is lost, but also council taxpayers pay for the costs of redundancies. This would then allow new academies to run a budget surplus in their first year without having to do anything; a massive transfer of money from public to private hands. It is a scandal if these redundancies have been rushed through before conversion so that the financial burden falls on the local taxpayer, rather than the new academy.

(Source: http://educationworkers.wordpress.com/2012/09/05/iww-education-workers-help-block-8-academies-in-birmingham)
Posted by Brunel IWW at 13:44 No comments:

Brunel to experience a decline in entries for teaching courses? Let's hope not!

Seen purely as cost-cutting exercise with a risk of setting the standards back many years the government plans to do away with qualified teachers.  Click here for the full story.
This is bound to have an impact on Brunel's teaching courses affecting the Sport and Education department.
Posted by Brunel IWW at 08:09 No comments:

Costa & helping the 'partner' for partnership in John Lewis

At 12pm on Sunday 15th July, SolFed members dragged themselves out of bed to join forces with local AFed and IWW activists to extend the anti-workfare campaign to the Costa coffee chain. A cup of coffee from the independent coffee shop next door helped us get ready for the picket. We managed to hand out around 150 leaflets, and, as before, we felt that people were generally very sympathetic to our action (apart perhaps a traditional Catholic, (French) National Front voter).
After about one hour we swiftly moved to our next target: John Lewis.
SF members attended the rally on Oxford Street in London yesterday in support of the store’s cleaners striking 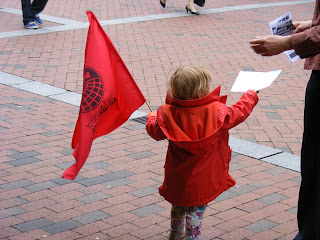 to secure the London Living Wage.
Responding to the IWW call, we organised a picket at our local store in solidarity with their strike.
John Lewis workers were leafleted for a good 20 minutes inside whilst outside people were made aware
of the strike for 45 minutes. Again, lots of sympathy for the strike and 200 leaflets handed out, especially due to the impressive work done by our young activist! 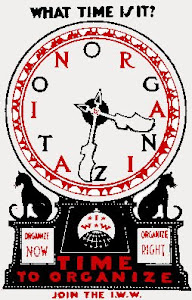